From contemplating hanging up his spikes to quitting his job and making the USA 1500 Final, Tim Gorman's life has changed significantly over the last few weeks. 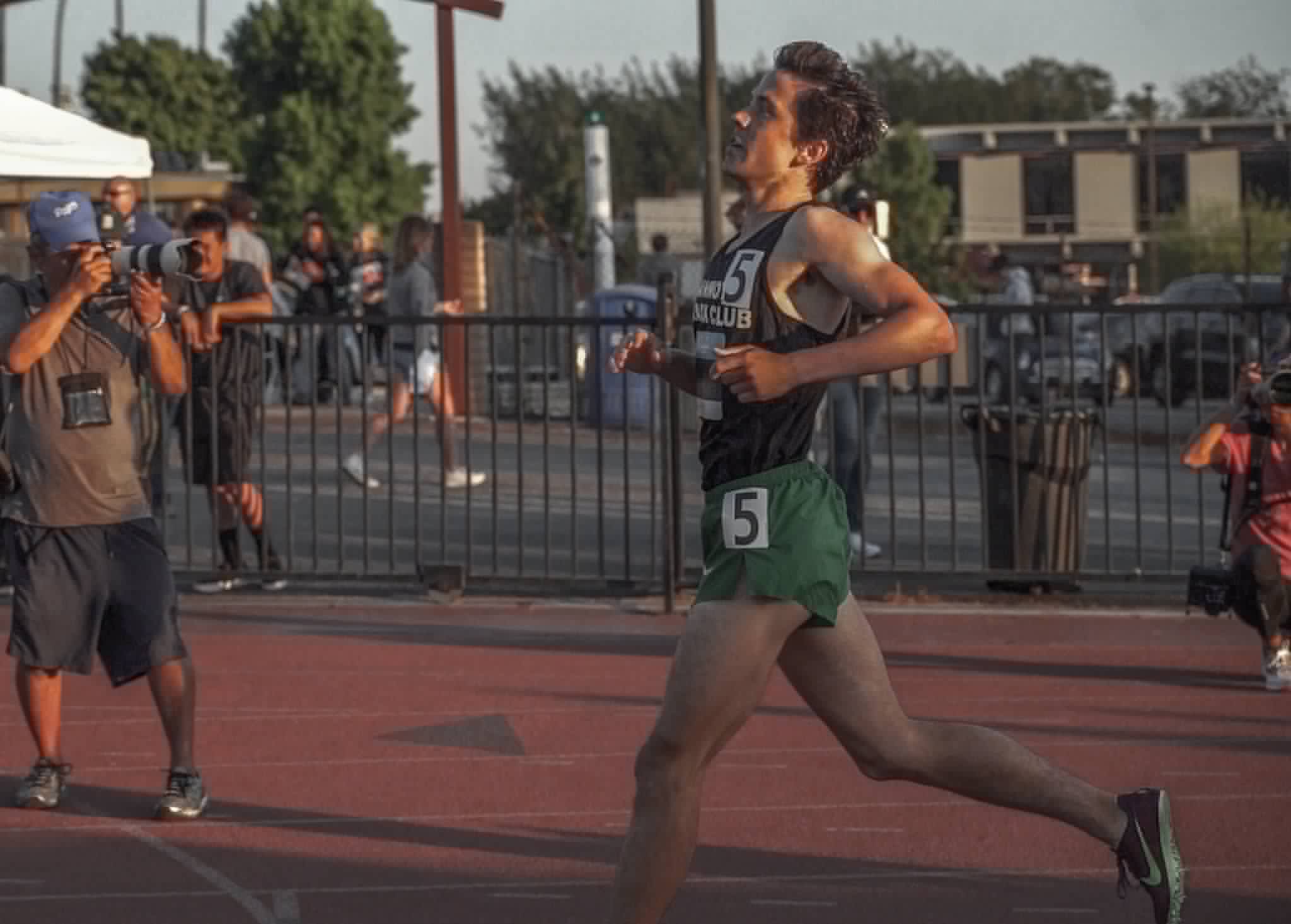 If you are a fan of US Track & Field, you probably recognized most of the field from the Men's 1500m final at this year’s championships on July 28th. There were the favorites (Matt Centrowitz, Craig Engels), the up and comers (Henry Wynne, Sam Prakel), and the veterans (Ben Blankenship, Eric Avila).

And then there was Tim Gorman, who was capping off the craziest week of his life and was just stoked to be there. “It was an absolute whirlwind," said Gorman a week after racing in his first US Final, where he placed 12th. "I found out I was going to USAs on Friday, quit my job on Monday, flew out to Des Moines on Wednesday, made the final and raced against the best in the US on Sunday. Top one most eventful week of my life."

I caught up with Tim to ask not only about his wild week at USAs, but also about his journey in the sport, how he stumbled upon the Mammoth Track Club, continuing to “stop and smell the roses,” and what is next for him!

First, congratulations on not only competing in your first US Championships, but also on making the final! How has the last week been for you?

It was an absolute whirlwind. I found out I was going to USAs on Friday, quit my job on Monday, flew out to Des Moines on Wednesday, made the final and raced against the best in the US on Sunday. Top one most eventful week of my life. And all I could think the whole time was, "Stop and smell the roses." I wanted to reclaim the phrase "Happy to be here." A lot of people use that phrase as a negative thing, like people are just "happy to be here." I was happy to be at USAs and I was proud to be happy. I have found in the past that I've worked so hard and not taken the time to appreciate the fruits of my labor. I've been too stressed to enjoy it. USAs was the fruit of my labor. It was a big, juicy plum, and I savored every bite.

You tweeted after the meet that you were the 28th fastest miler in your high school freshman class at Christian Brothers Academy. Now you’re a 3:40 guy and a US Finalist. Was this a position you envisioned yourself being in, or has each new level you’ve reached been a surprise?

It's probably been more of a surprise to me than it should have been. To a lot of people, I am not modest. I like to act cocky sometimes because I think it makes you a better athlete, but it's mostly outward facing. Really I often lose sight of what I am capable and what realistic or far fetched goals look like. I ran 4:01 in the mile in 2014. I probably should have put the 2019 US Championships on my radar a long time ago, but I can be a weenie about big goals. Little by little I'm learning to feel worthy of the luck I've found in this life.

Obviously running 3:40 and qualifying for USAs has to be a big confidence booster, but how much does making a US Final change your perspective about what is possible for you?

Making the final was not as important for my sense of self worth as running 3:40 was. My training this year has been mediocre at best. Shitty is a more accurate word for it. But knowing that I can get into such good shape so quickly really reminded me of what is possible. I'm excited at the prospect of a full year of training.

That said, making the final was definitely a Top 3 "Coolest" moment of my running career.

You’ve had the chance to be part of some very storied programs throughout your career, from CBA in high school to Dartmouth and Oregon in college. Not many athletes are able to compete for teams with such tradition. What about being in those environments has helped you as an athlete?

Being part of such successful programs has been a gift. It's meant that I've run with some absolute studs, and its gotten me some cool wins, like team wins at Penn Relays and NXN. More importantly, it has made maturity second nature. The expectations are raised at good programs like that. The expectations for work ethic, performance, clutchness, are all set at a high level all year. After so much of that I now understand how to act.

It has also broken down the distance between me and the best guys in the world. I trained with some highly pedigreed athletes, and that has helped me to realize that they are no different from me. We are pretty much all just kids from the suburbs. The best of us just work hard and do everything right. Once I learned that the guys I was looking up to are no different from me, once I learned to kill my idols, that's when I became good at running.

In your interview after the prelims with Letsrun.com you said that you moved to Mammoth to write for the newspaper there, and that Coach Andrew Kastor of the Mammoth Track Club approached you about training with them. How much did you know about the running community and tradition in Mammoth when you moved there, and how was the adjustment to living and training at altitude for you?

In hindsight, I was so ignorant. I didn't realize that Mammoth is pretty much the perfect place to run. There is an energy here of greatness. It feels different even than Eugene. You can't help but enter races confident in your training after putting in the work up here. I didn't know that Deena [Kastor] or Meb [Keflezighi] or Ryan Hall called Mammoth home. I knew nothing. But the training that Coach Kastor has given me in this place has worked like no other system I've ever been a part of. I didn't feel fit when I was getting my ass kicked, running slow at 7,000 feet, but then I would enter races and feel great butting heads with very talented athletes.

Speaking of which, the transition was rough. My job took a lot of mental and emotional energy. I had never trained at altitude. For 7 months I felt like a high school freshman again. I was training with the women's group for most of the winter, and Deena was dropping me. Then my body changed. I truly think that a year at altitude has changed my physiology. I recover so quickly now. Races feel so much better. Andrew Kastor knows so well how to train people at altitude.

I received two pieces of advice that changed my world. First, my teammate Reid Buchanan told me that you can't compare times at altitude to times at sea level. Once I figured that out I stopped overthinking workouts and just worked as hard as I could. I saw the times with fresh eyes, like I'd never run before.

Second, I was used to being at sea level where I could go faster than the prescribed splits through the whole workout. For months in Mammoth I would train like I did at sea level, go hard from the start. After months of being unable to hit the splits at the end of workouts because of fatigue, I figured that you just can't train that way at altitude. I said to Deena Kastor, "I need to learn to go easier at the beginning of workouts so that I can hit the splits at the end of workouts." She said to me, "No you don't. Just keep going hard. You're body will adjust." So that's what I did. I didn't think about the end of the workout; I kept thinking one rep at a time. After a while, and to my own surprise, I could finish strong. My body adjusted.

What are your plans for the rest of the summer? Any races on the schedule? I know it's immediately after this year’s USAs, but have the expectations already changed for 2020?

I'm planning on training through the Long Island Mile in September. I want to knock out my qualifier for the trials next year while I'm still in shape this summer.

Truthfully, the expectations have changed. They shouldn't have. They should have been high consistently, but they were not. It's sad, but a month ago I was applying for jobs in San Francisco and fully prepared to hang up the spikes. Now I'm hoping to make a splash at the Olympic Trials. The system in Mammoth has worked. I've found myself really happy here. I look forward to another year of running. The plan for next year is to run fast times. Though I've made the final at USAs I still haven't run very fast relative to the guys I'll be racing. Also, I want to keep smelling the roses.