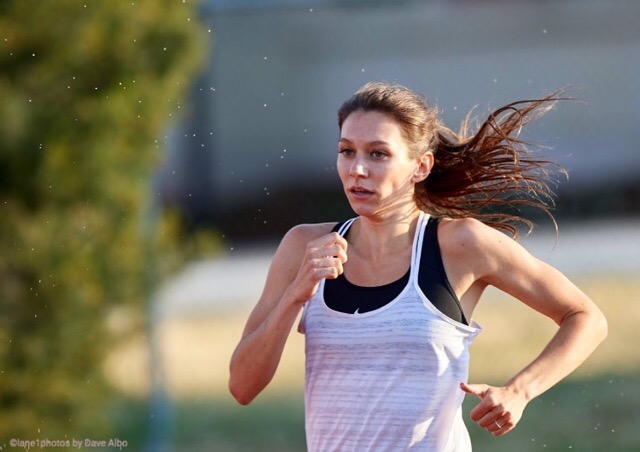 To compete in distance running at the highest level takes incredible drive, discipline and talent.

Stinson attended Summit High School in Bend, OR, where she ran “a little bit of everything.” While other kids complained about racing the 800m, 1600m, 3200m and 4x400m in one meet, Stinson embraced it. She loved challenging herself at every distance.

This fearless mindset carried her to a PR of 4:27.38 for 1500m by the end of her high school career, a time that landed her the opportunity to run for the University of Oregon, home to one of the nation’s most prestigious distance running programs.

“The opportunity to train and compete on historic Hayward Field was something that was very special and exciting to me.”

Like most incoming D1 student-athletes, Stinson underestimated the difficulty of competing at the collegiate level, especially competing for a team of Oregon’s caliber.

“It was so overwhelming to walk into that [win]. I was like oh man, I have a lot of work to do.”

After redshirting her freshman cross country season and adjusting to college training over the following two years, Stinson finally broke through in the 1500m as a junior. At the 2015 NCAA D1 Outdoor Track & Field West Preliminaries (i.e. the qualifying meet for the NCAA D1 Outdoor Track & Field Championships), she crossed the finish line of the 1500m final in 4th place, qualifying for Nationals for the first time and running a PR of 4:18.38.

“It was so exciting to be able to qualify for the first time alongside 3 of my teammates, especially in my favorite event. It had always been a goal of mine.”

While Stinson never struggled with serious injuries in college, she struggled mentally.

“I had to learn to set appropriate goals in races and not get down on myself whenever I fell short of my expectations. I didn’t PR in anything during my first 2 years. I had to learn to believe in myself no matter what and recognize that even if one season didn’t go as planned, I could still be successful in the next one.”

“I was so thankful for my 5th year in cross country. I went from redshirting as a freshman because I was too slow to scoring for the team that won Nationals. Everything came full circle.”

Stinson racing as a post-collegiate athlete

After finishing her collegiate eligibility on such a high note, Stinson continued to train with the Oregon team under Head Coach Marisa Powell. She juggled practices with classes and student teaching obligations as a grad student pursuing a Masters degree in Education.

“That’s when my crazy schedule began.”

Despite her hectic lifestyle, Stinson shaved a few more seconds off her 1500m PR during the 2017 outdoor season, running 4:11.27 and qualifying for the 2017 USATF Championships. That qualification sparked her desire to continue running at the professional level, but she never thought once about getting an agent or a sponsorship. Instead, she moved to Boulder, CO and immediately started teaching.

Now her days begin at 5 a.m. with an easy run. After running and commuting 30 minutes to work, she teaches from 7:30 a.m. to 2:50 p.m. The kids go home, and she attends meetings until 4 p.m. She leaves school to meet a friend for a second workout and gym session at around 5 or 6 p.m. She gets home at 8 or 9 p.m., makes dinner and goes to sleep before repeating the same schedule the next day.

And she wouldn’t have it any other way.

“In the dark days of winter, it’s easy to think that maybe I should’ve just gotten an agent and moved in with a group and gone all in, but I think that’s so opposite of the lifestyle I’ve always had. I don’t know if I would’ve been successful in running if I was just a full-time runner.”

Stinson currently trains with a group of likeminded girls, including her former Oregon Duck teammate and NCAA D1 All-American Molly Grabill, who all work full-time and meet each other at odd hours to link up workouts whenever they can. They call themselves “the nomad group.”

In addition to the nomads, Stinson has her husband, Parker Stinson, who recently set the American record in the 25k at the 2019 River Bank Run, as part of her support system.

“Parker is definitely my number one supporter. He times my workouts and drives behind me in the winters. It’s so nice to have someone to just be there.”

This summer, Stinson aims to qualify for the USATF Championship final in the 1500m. In 2020, she aims to compete in the Olympic Trials.

“I want to show up to the Trials with the 1500m Olympic standard like ‘Okay, here I am. Anything can happen.’ That’s been my big goal forever.”

Even though Stinson has always possessed the drive, discipline and talent to succeed in distance running, she’s worked incredibly hard to achieve her goals. As a professional, she’s had to adjust her mindset once again as her body adjusts to higher mileage, longer workouts and more intense competition.

But as Stinson’s busy schedule suggests, she lives for challenge, and she knows what it takes to achieve success at the highest level (and live up to her title of ‘America’s Fastest Teacher’).

Stinson running a workout while balancing her teaching schedule

When asked what advice she would give to younger runners, Stinson stressed the importance of pushing through the dark times and continuing to believe in your talent no matter what.

“Even when things are dark, whether you’re dealing with an injury or falling behind in races like I did, just keep racing. Keep putting yourself in uncomfortable situations. Keep training hard because eventually - and I’ve seen it time and time again with myself and with others - if you want success and you keep working hard, you’ll come out of the dark times, and you’ll find success again.”

Many professionals drop everything to focus solely on running, but Stinson proves that you can have a full-time job, train and still compete at the highest level.

“As long as I’m continuing to PR, why stop? Why change?”

With her drive, discipline and talent, we don’t think she will.