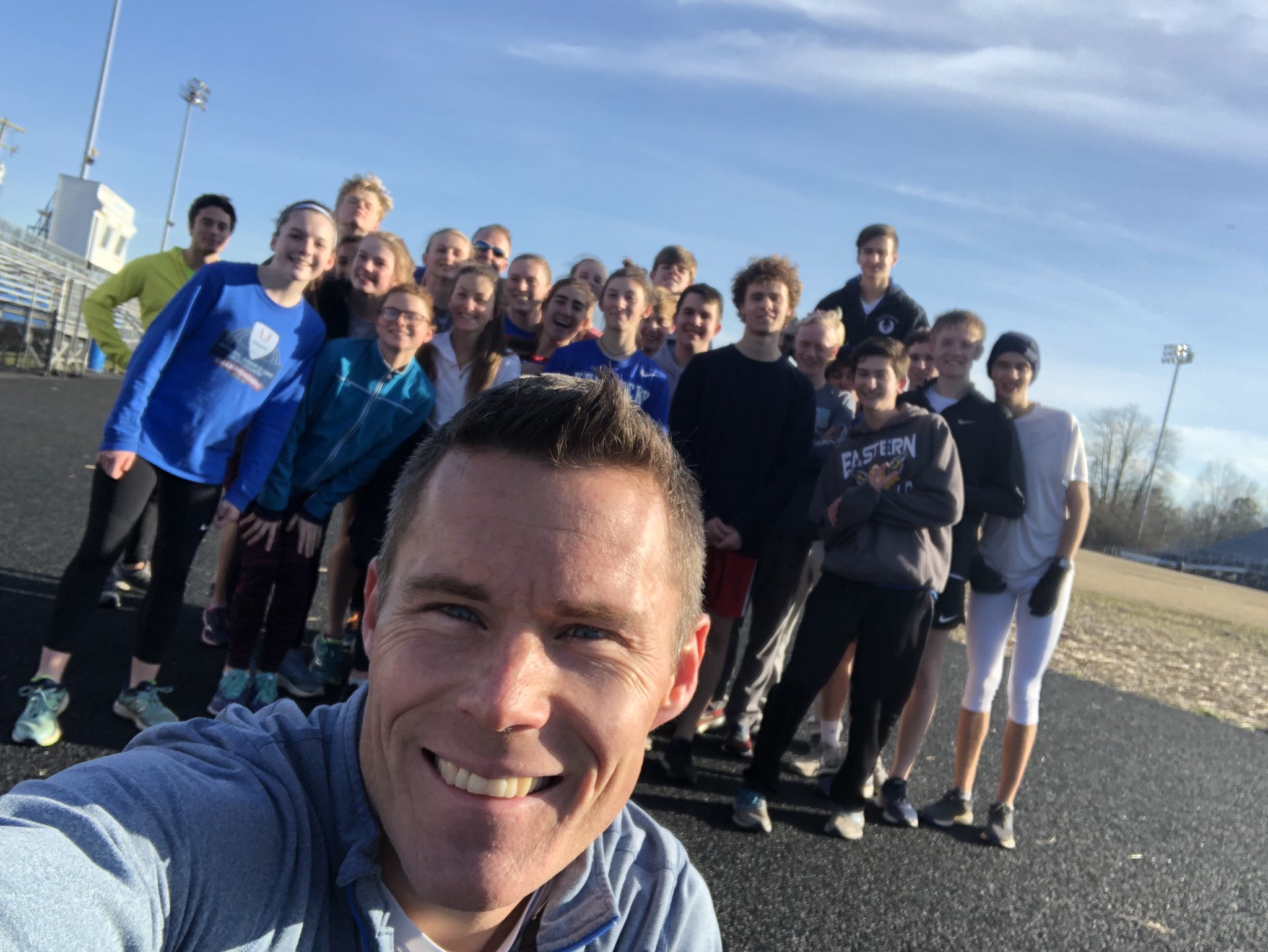 Easily the hardest thing is just missing the people. It was such an abrupt end to the track season and to never be able to see the team again for the rest of the spring was hard. I am a natural optimist, so early on I was hoping this break might just be a couple of weeks, but as it became more evident that this would be long-term it really was tough. Other than my immediate family, I see my athletes more than anyone else. They are my people! We run together, work hard together, challenge each other, laugh at and with each other – it is a family. I have missed them a lot!

Obviously, the seniors missed out on competitive opportunities but we also missed out on a team banquet to say thank you and goodbye to them and their families. We missed a season that certainly would have included breakthrough performances for many younger athletes. I wonder who would have made a big shift forward when everything clicked one day. It is sometimes hard to imagine that it is gone and not coming back.

As a coach for 17 years I also missed the friendship of the local and regional coaching family. Throughout the spring my coaching colleagues and rivals are always in touch and while we’ve interacted some it is not the same as hours every week standing together taking splits or enjoying a hospitality suite lunch. Since we host a huge meet in the Eastern Relays I also love seeing friends from IN, OH, TN, WV, MO, IL, and all over KY too. Track coaches are good people and such a diverse group of folks!

From pretty early on in college I knew that I wanted to teach and coach. My high school coaches were some of the most influential people in my life during that pivotal stage of adolescence. When I started college I didn’t really know what I wanted to do and my dad asked me to think of who had impacted my life. Other than my parents, it was coaches and teachers. Peter Reed became my XC coach in the summer before junior season and he really shifted my mindset into think of running as something that was interesting and fun. He also really ramped up the challenge level of our training. He helped me transition from being a “member of the XC and track teams” to becoming a “runner” and proudly so.

My track coaches Mike McCoy and Jim Holman helped me get tougher and learn to race with some edge. McCoy was the head football coach and had played in the NFL, so when he’d pop me in the chest to pump me up it made me feel like a real deal athlete. Coach Holman was technically the head girls coach in both XC and track, but always shared his wisdom with me too.

All of my coaches set examples that I was proud to follow. In addition to my HS coaches, my college coach Gene Weis helped me grow a lot. I tended to overthink things sometimes and he shared pearls of wisdom along the lines of “It ain’t rocket science Michael, you just put one foot in front of the other.”

I wouldn’t be the coach I am now without all of those positive leaders in my life.

I love a good tempo run. We start early on and run different variations all summer and into the fall. I think there is great power in athletes running further than race distance at a sustained challenging pace. It builds lots of mental strength on top of building the aerobic engine. Then once we get into competitive season we do a variety of reps at or slightly faster than race pace. We run lots of 800m repeats, 1ks, and 1200m repeats.

What have you found are the ingredients for a healthy, focused, and cohesive team culture, particularly on a high school team?

We talk a lot about our shared expectations. We have a big group of athletes, young men and women, at many different levels of performance and experience, but we expect everyone to have a high commitment level. We love it when we can celebrate winning our county championship (our district has 20+ high schools) or contending for top 10 or podium at the state meet, but we celebrate progress of all kinds.

One of my favorite memories from last season was late in the year we had a couple of girls who had never broken 30 minutes. I called out their time about 200m from the finish and they looked at me with shock on their faces as they rolled on to smash the 30 minute barrier.

We work hard together, challenge and encourage each other, and create a positive family atmosphere where everyone is accountable to the goals of the group.

I think being remarkably consistent is far better than being inconsistently remarkable. We recently graduated several seniors who are going on to run in college that started out DEEP on the JV team. These are guys who started their careers 23+ minutes for the 5k that got better every season for 4 years and ended their careers sub-17 or low-17. And they will keep getting better in college. And these guys just learned to love training. Every year they did a little more, a little faster. They just loved the process of training and did so consistently.

I also am incredibly fortunate to have a wife who loves track and XC. She was a far more successful athlete than I was and a multi-time state champion. She often reminds me that simple training can be the best training. Sometimes as a coach you think you need to re-invent the wheel or come up with some snazzy workout but in reality most training falls into the category of good, fundamental, basic work. If I ever get too far away from that Holly is quick to remind me of past successes with good, basic, simple work.

The app has been awesome! We did not really roll it out until June when we transitioned from track to XC work, but it is really cool. Our team still has still not been allowed to gather to train. We are scheduled to start on 6/29. So we have missed the community aspect of practice quite a bit. The trackster app creates an interactive environment that we missed so much throughout the spring. It allows people to see what everyone is doing to interact, to celebrate together… It isn’t the community we have with daily practice, but it has been way better than filling out a google sheet!

I also love the metrics that it gives me as a coach and the metrics athletes can see. I have not even begun to touch the full breadth of features yet, but am looking forward to exploring more.