The Greatest Race in America

For Marty Hehir, Dawn Grunnagle, and Tyler Andrews, Saturday's Olympic trials will be the cumulation of years of work and sacrifice. 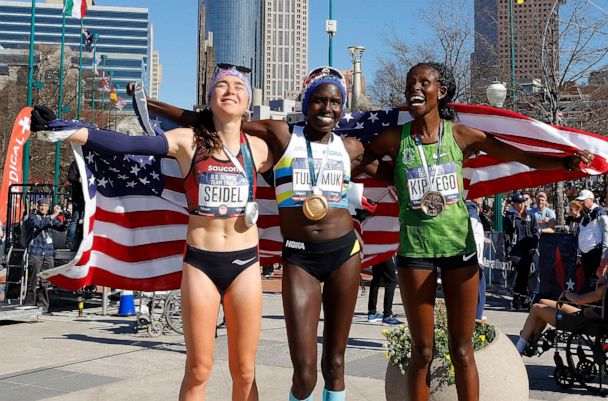 The Olympic Marathon Trials is one of those unique American sporting events that has multiple levels of significance and intrigue. While the excitement of watching the best runners in the U.S. compete for three spots on the Olympic team is the most obvious draw, the diverse array of athletes from all different backgrounds gathering to put it all on the line makes the Trials a magical and celebratory event.

For Reebok athlete and 2:13 marathoner Marty Hehir, the race in Atlanta this Saturday will be the culmination of years of sacrifice. As a full time medical school student, professional runner, and father and husband, Hehir has been juggling his full slate of responsibilities while going all in for a shot at the Olympic Dream. “Before my first marathon, Coach [Chris] Fox (coach of the Reebok Boston Track Club) intentionally had me doing about 90% of the real work because I was still in school and getting a qualifying time was the priority,” said Hehir. “This time around I’ve been sitting around 110 miles per week with very solid workouts and getting pushed by my teammates.”

While Tyler Andrews can usually be found traversing the mountains of Ecuador or running ultra marathons, the Hoka runner is looking forward to dropping down in distance and testing himself against the best in the States. When asked what makes the Trials so special, Andrews quipped, “The slowest guy there has run 2:19. And you never know what's gonna happen.” Although he does have a 2:16 marathon personal best, Andrews is best known for his prowess in the ultra world, where he has set a 50K world best on the track, won a U.S. 50 mile title, and most recently set a fast known time for a route in Ecuador (check out Trackster's 2-part video series about Tyler's FKT!). For his tune up race for Saturday, Andrews “ran six-and-a-half hours of a nine hour race. Then I got tired and took a bus back.”

Even though Nike’s Dawn Grunnagle hasn’t had the ideal build up, she is still excited and ready to be on the Trials starting line. The 42 year-old Grunnagle has become one of the top masters marathoners in the country over the last few years, and set a PR of 2:33 over the distance in Berlin last September. However, recently she was shoved into a pole at the start of the San Silvestre 10K in Spain on New Year’s Eve, her pelvic alignment was tilted significantly, and her training has been limited by injuries as a result. “If it were any other marathon I would have scratched,” said Grunnagle. “It is only once every four years you get to line up with the best in the U.S.”

The race on Saturday should be a war of attrition, as the Atlanta course is aggressively hilly. While the winning time won’t be significant, it should be a good old fashioned grinder of a race with the Olympic Team on the line. “The course will take no prisoners on the last loop. It’s only up or down and that’s going to beat up our legs way more than normal,” Hehir noted. As his training base in Charlottesville is particularly hilly, and his team has done most workouts over hilly routes, Hehir believes Saturday “should be just another day for the Reebok squad.”

For Andrews, the hills shouldn’t be a problem. Living in Quito and specializing in trail ultras, Andrews has a regular diet of hills in his training. “I eat hills for breakfast,” said Andrews. “My standard woods loop has over 1600 feet of climbing. At 9000 feet. They're even better with little cinnamon on top.”

While Grunnagle hasn’t been able to prepare for the specifics of the hills as much as she would have hoped, she will lean heavily on her past marathon experiences on Saturday. When it comes to the toughest sections of the course, she said she will be “counting on adrenaline, my past marathon experience and strength and my fighting mentality to get me through the race.”

The marathon is a volatile and unpredictable event, and with the Trials being such a hyped up race, finding the best strategy for race day can be tricky. Although Hehir has raced the track trials in the 10K last Olympic cycle, this will be his first marathon trials. As Saturday is only his second marathon, he is mostly focused on “executing this one better than last time. That includes being patient through 30k, getting all my fluids and gels down, and putting myself in position to take my shot.”

A jack-of-all-trades runner, Andrews raced the 2016 trials, placing 83rd on a hot February day in Los Angeles. While this time, due to his heavy ultra schedule, he will be a long shot to make the Olympic team, that doesn’t mean that he is headed to Atlanta with no goals in mind. “I'm seeded 147th,” said Andrew, “But maybe, just maybe, if, like, 145 of those guys have a bit of an off day, I could be on that team. Believe in miracles. But, for real, I want to beat that number by as much as possible.”

Whatever happens on Saturday, the runners all appreciate the beauty of the Trials. Even though the past few months have been less than ideal, Grunnagle believes that “it’s a gift and opportunity to be there” on the starting line in Atlanta, where her family has driven to all the way from Green Bay, Wisconsin to cheer her on.

For Hehir, the cyclical nature of the event, the long build up, and the culmination of so much work makes Saturday’s race such a singular event. “Anything that comes around once every 4 years is bound to be special. That’s 4 years we have all been waiting to get on that starting line. 4 years of dreaming about making a marathon team.”