On this upcoming Monday - April 18th 2022 - thousands of runners will take to the Massachusetts streets to participate in the historic 126th Boston Marathon. The elite field, specifically the Americans, is really deep with top-tier talent spanning all ages and backgrounds. Some of these runners expected to lead the pack include Molly Seidel who is coming off a bronze medal at the Tokyo Olympics, Sara Vaughn who set the course record at CIM in December and Nell Rojas who got 6th at the Boston Marathon in 2021. The race is going to be a total thrill and the weather forecast (as of Saturday April 16th) is indicating a big chance for big times...

Among these pro's is one of the Trackster community's all-time favorite runners - Desiree Linden. Recently we've been lucky enough to become the exclusive training app of the 2x Olympian, Brooks pro and Boston Marathon champ! Let's review some of the legend's training details leading into this Monday’s race….

This past fall was the first and only time that the Boston Marathon was run outside of the usual springtime setting. According to Des' agent, Josh Cox, Des was close to withdrawing from the race due to injury during the build up. Still, she showed up and ran the full thing only to come back a few months later to do it all again! Here's the Trackster post for October's race where she got 17th overall:

This is including about a week off at the end of October as well as a week off around Christmas. Even with those stretches off of training, she averaged almost 60 miles / week.

Now, let's get more specific to the Boston block...

Since February 8th, when Des went to the Phoenix area to hone in on marathon prep, she averaged 96.8 miles / week with a total of 900.5 miles logged. For the fans of total elapsed time instead - this equates to over 11 hours of running / week and 106 hours total! 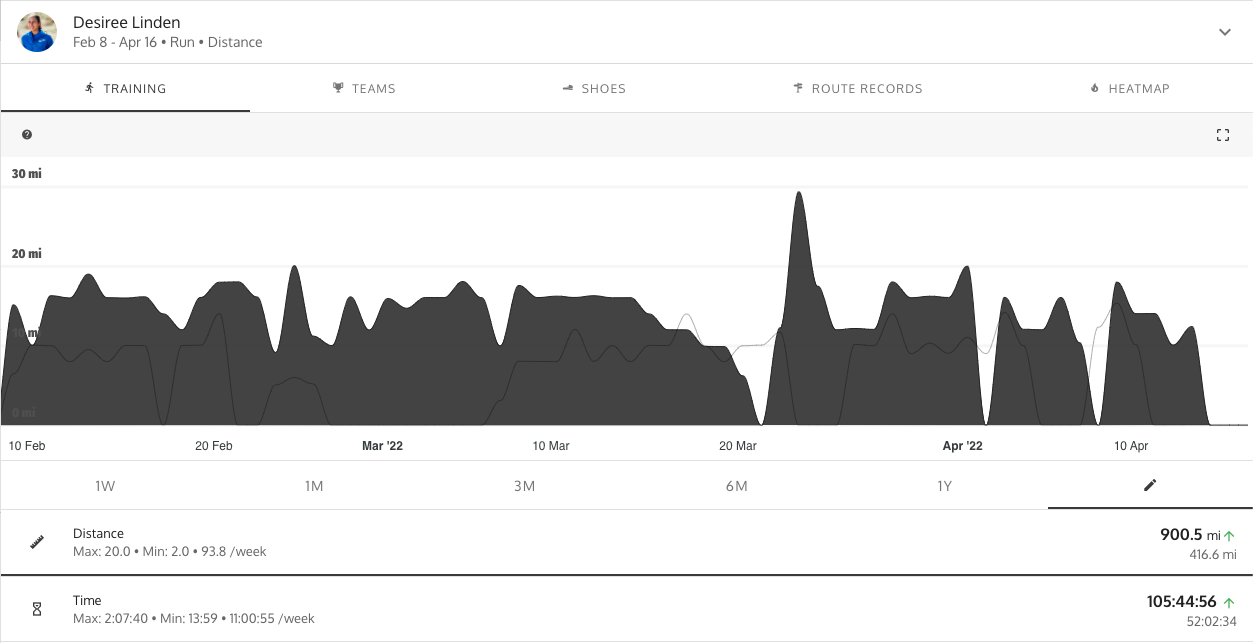 More stats from this time:

All of this data comes from Des' COROS PACE 2 GPS watch that's synced to Trackster, BTW.

Des had two days with over 20 miles of training including one single run on April Fool's day where she ran 6:23 pace for the run overall but, even better, split a 5:17 for the 11th mile during the workout. She also had multiple miles under 5:40 during this alternating tempo type workout.

In the last 2 months, Des has had 30 days total with at least 15 miles or more logged.

On March 21 Des headed into the concrete jungle aka New York city aka the city so nice they named it twice (the other name is Manhattan) to the New York City Half Marathon as part of her prep for Boston. Per her IG post after the race: 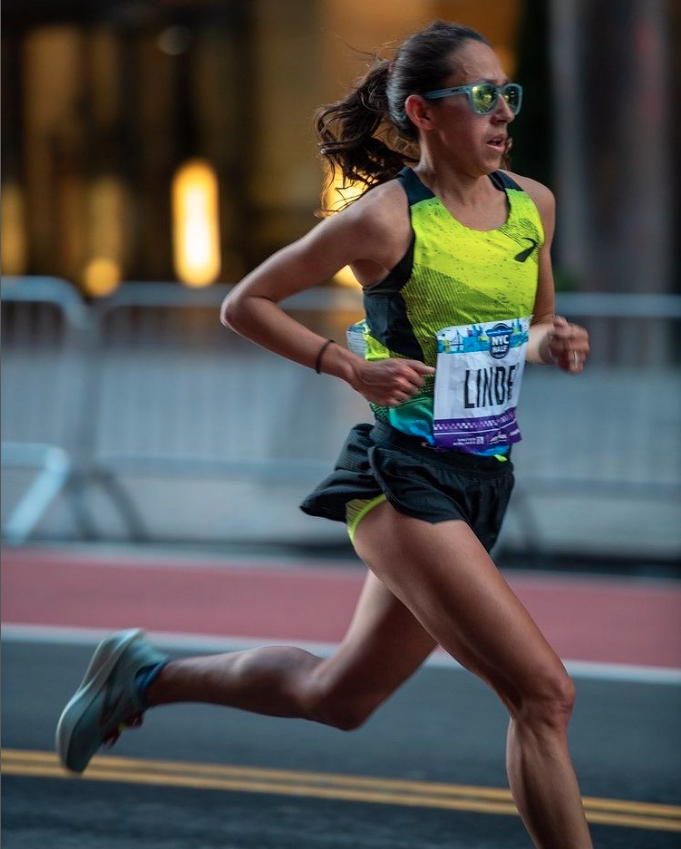 "No seriously, it’s been a minute! First race in a long time - fun to spin the wheels at #unitednychalf. On the results page, it was about as messy as my pre-race photo. In reality, it was pretty productive — got some good work in and made some gains. Four weeks to #boston126 — eyes up, let’s go.⁣"

Check out the Trackster post for the NYC Half effort here:

Since the NYC half, Des has still averaged 93 miles / week. Comparing this range (March 21-April 14) to the previous (Feb 24 - March 20) she did dip in total mileage slightly - coming in at 317.2 mi compared to 355.0 respectively. Definitely normal to drop mileage this close to the race but I don't think it can be considered a taper if the total weekly mileage is still in the 90's 🤣 . Interesting to note, both her average heart rate and average pace during this time went up - indicating of course an increase in harder, faster sessions. The heart race went from 148 to 152 and pace from 7:06 to 6:30.

All in all, Des is going to be ready to rip on Monday as shown by this massive block of training. We'll surely be rooting for magic on this Marathon Monday as our favorite pro does what she does best - rip the Boston Marathon - but I wanted to say thanks to Des and to the entire Trackster community regardless of this race's outcome.

This is really about the journey - not the final destination or single result. Des has, and continues, to have built one of the best American distance running careers of all time and we're just flattered to play a (tiny, tiny, tiny) role in it. Kick some a** on Monday Des and all of the runners in Boston - we can't wait to see what happens and of course can't wait to get the data uploaded to Trackster, too!! 😉

As I approached the slick steps to my friends apartment on Chestnut Hill Ave, I shielded my head with the CVS bag I used to carry my loose cans of Natty Lights. The rain was relentless this morning and I had just biked about a mile from my Mod (shoutout 28A gang) which left my hoodie more than soaked. 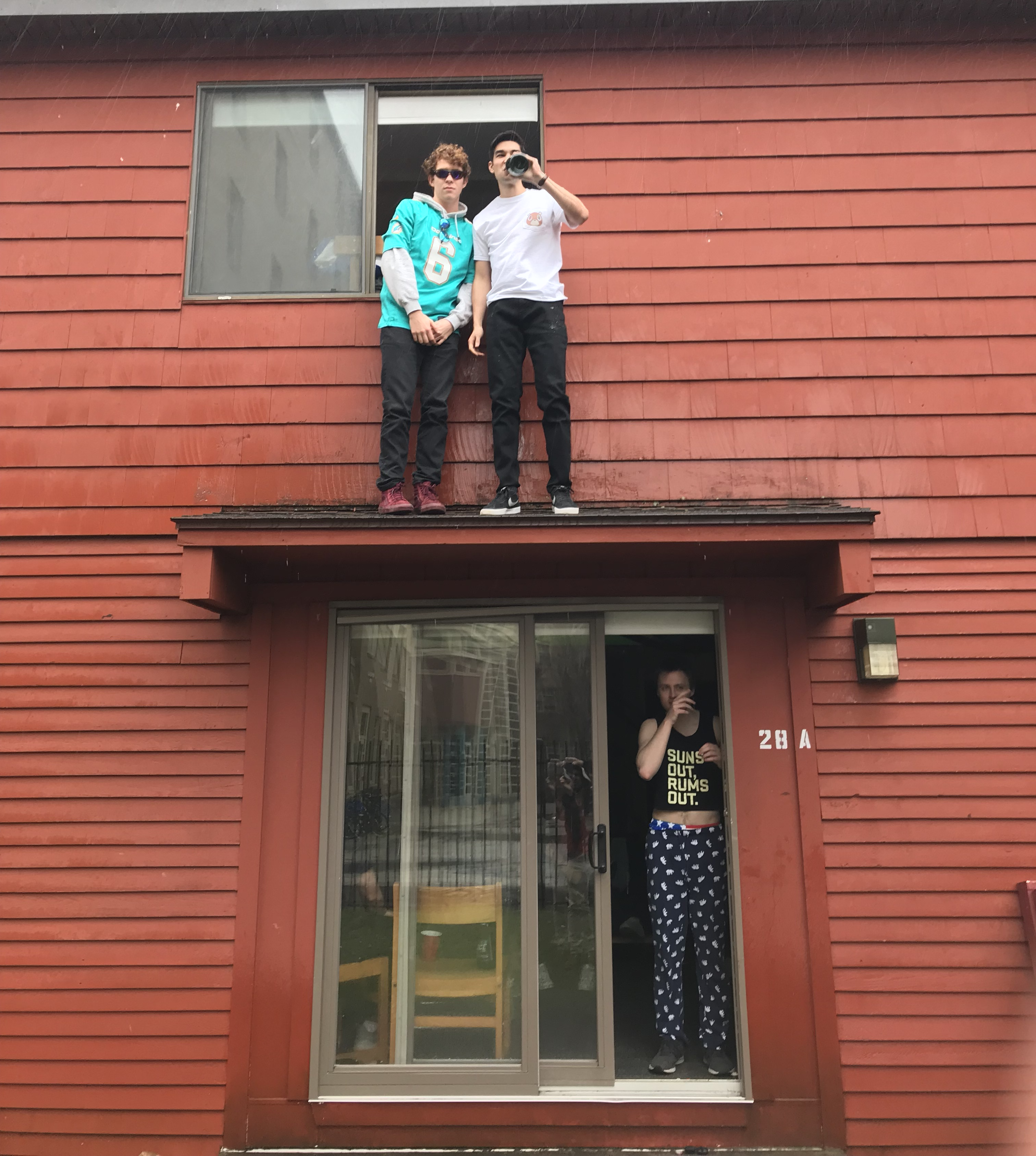 (From top left to bottom right) Emmett, Gabe and Jack the morning of the Boston Marathon, Mile 21

My morning began around 5:45 am with my roommates blasting Kanye West’s “Good Morning” on our speaker system. We had at least 12 people sleeping on the floor in our 6 person Mod that night as visitors and friends that lived off campus wanted to be as close as possible to the action immediately in the morning. The debauchery began before Yeezy began his second verse on his third studio album “Graduation”. I engaged with our party goers for a bit - raging this early is a sign of respect to the runners on marathon Monday - before heading to a more low key location to watch the race.

As I peeled off my now dampened outer layer I was making my final mental predictions of the race.

“Damn”, I remember thinking, “this is either going to be epic or a complete disaster.”

It was about an hour before the race would begin and the police were closing off the route across Comm Ave that I’d just taken. The plan was to watch the race from the apartment on TV and stay out of the weather.

For those who are not aware, Marathon Monday in Boston is the best day of the year by a long shot. Obviously as a distance runner I’m biased but I would bet people from all walks of life and demographics in the city would concur. For 26 eastern flowing miles the streets of Boston are over-pouring with festivities, energy and complete chaos. For this particular year, though, the conditions were giving the regularly scheduled spirit a serious run for its money. Morale was low to say the least. 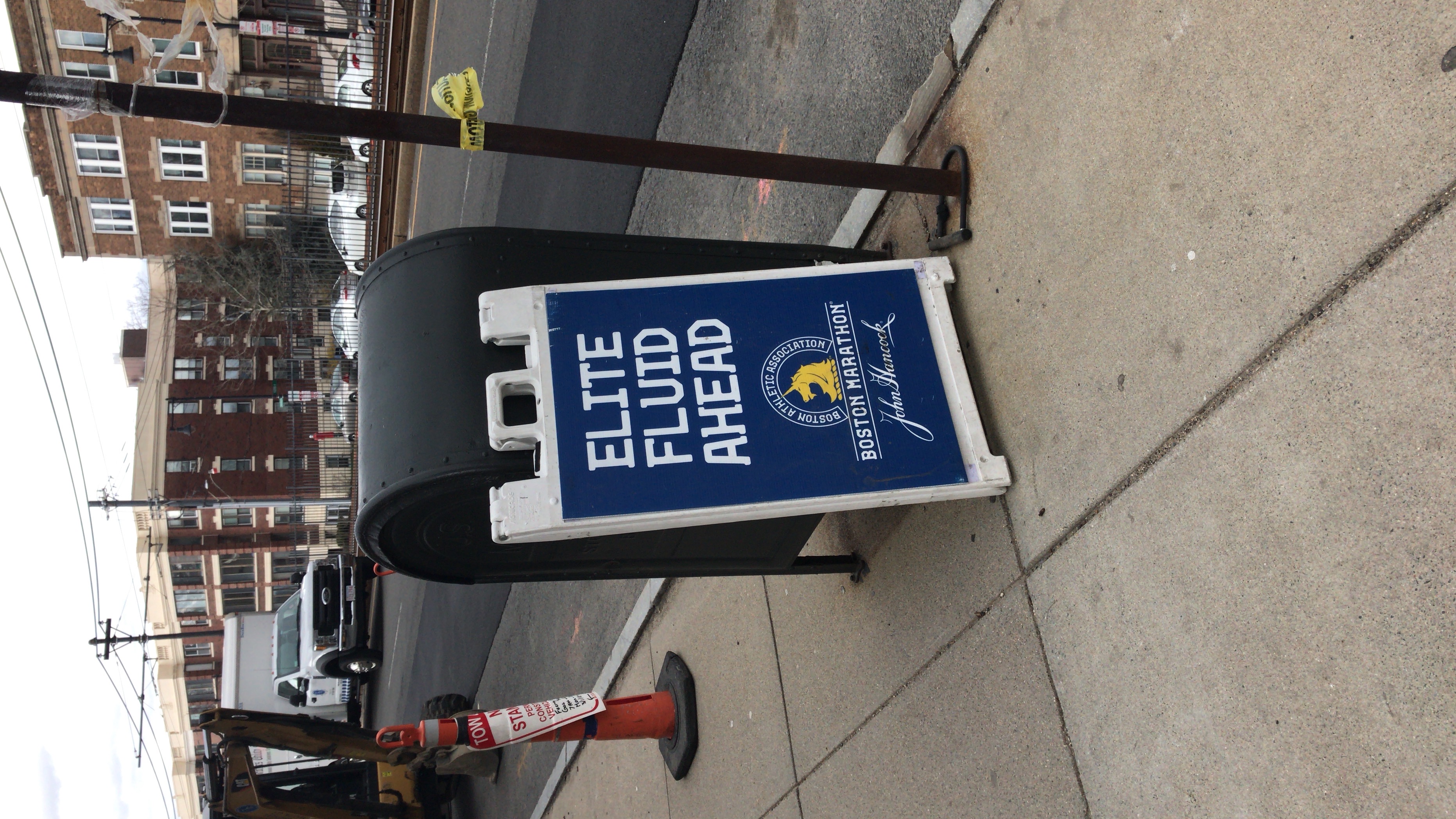 Comm Ave is lined with signs and ads on race day

I remember feeling beyond thrilled to see Des Linden take the lead of the race. It was a war of attrition and many of the elites simply couldn’t hang in these conditions. Any of the runners’ plans of finishing this race with a great time went out the window before the gun even went off. This race was different — it was about guts — plain and simple. Des was grinding and took the lead, never to give it back, literally right outside the apartment I was hunkered down in. The cowbells, airhorns and cheers blaired outside and, moments later, were echoed by the laptop streaming the race in front of us.

Morale skyrocketed on the course as well as in the apartment as Des became the first American woman to win Boston since 1985 - one year before the race began offering prize money.

Let me take this moment to appreciate the obscene fact that now, years later, I’ve the extreme pleasure of founding the very training app with exclusive access to Des’s training activities. If you don’t follow her on Trackster, do so NOW!! It’s a privilege to work with such a legend and, while I love every single Trackster user, her (and Josh Cox’s) support specifically give me an immense sense of pride to continue with our mission!!