On December 19th, 2020, the first ever race called the Marathon Project was organized and held in Chandler, Arizona. The mission of the Marathon Project was simple - to give pro marathoners a shot at running a fast time after what was the most stressful and tumultuous year of all time. With so many races and events cancelled due to the Covid pandemic, pro running agent Josh Cox and NAZ elite coach Ben Rosario stepped up in a huge way and got everything in order for a safe and controlled 26.2 mile competition. 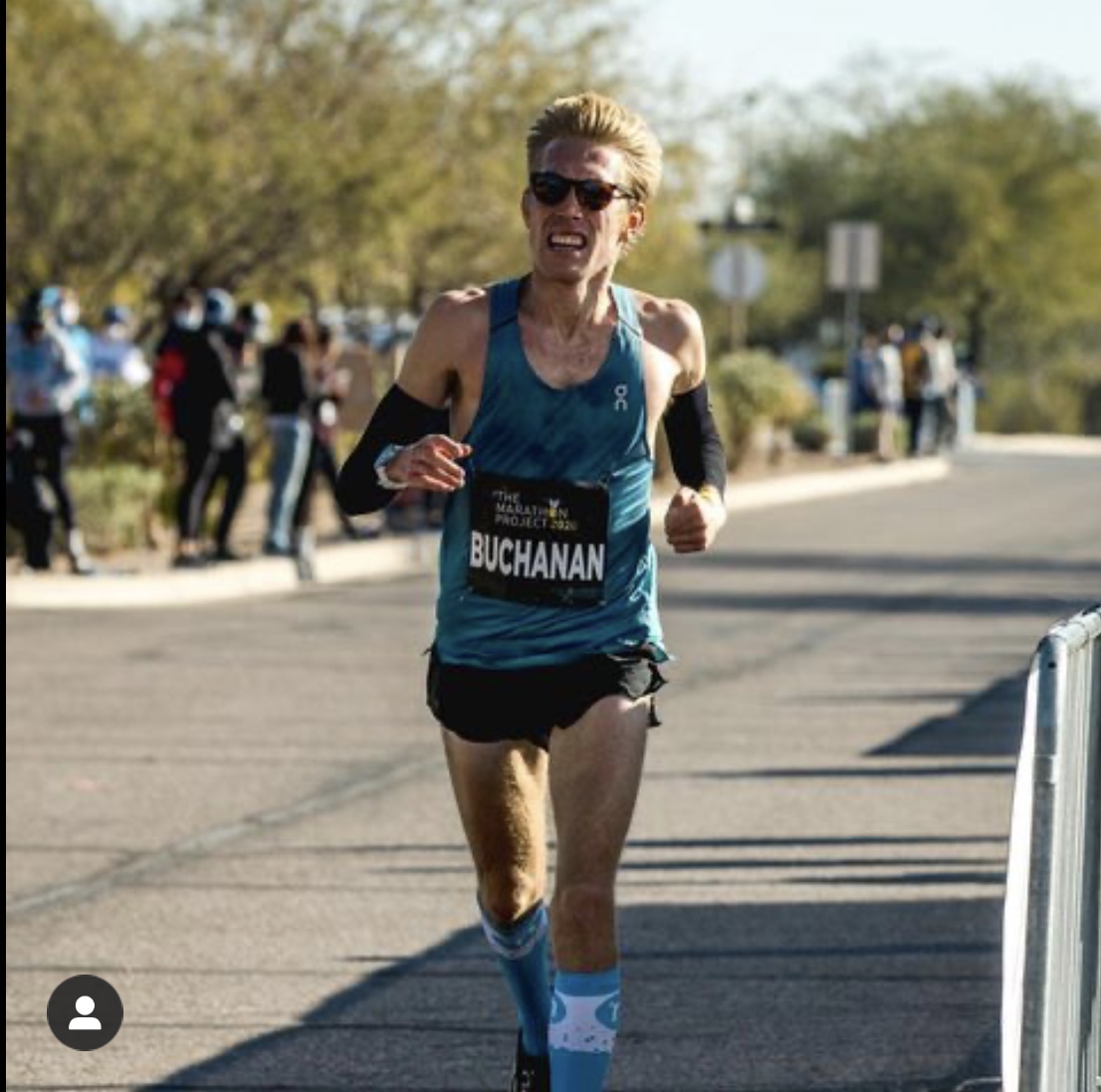 The results from the Marathon Project were extraordinarily fast. 7 men ran under 2:10 and 26 men ran under 2:15 (!). Marty Hehir broke the tape in 2:08:59 followed by Noah Droddy and then Collin Bennie.

Not far behind these Syracuse alums, in 13th place with a time of 2:11:38, was one Reid Buchanan making his first ever marathon 26.2 distance debut. A 2:11 debut marathon is one of the most superb American debuts that I could find on record. While there was no doubt leading into this race that Buchanan has unbelievable distance running chops, there is always a healthy amount of uncertainty for a first time marathoner.

Fast forward a few months to the spring of 2021, after the Marathon Project, I had the pleasure of linking up with the one and only Reid Buchanan where he resides and trains in San Diego, CA. We met up to shoot a Talking While Running episode, which, despite some tough windy conditions, lead to what I think is a fantastic video - check it out here.

After we shot the video and ran, we were chatting about his upcoming focus for training and what races he would target next. After a stellar debut marathon, Reid was waiting to see how the fall marathon schedule would shake out. Somewhere along the spring and early summer Reid and his coach Andrew Kastor decided to circle the Boston Marathon fall edition as the target race.

Normally the Boston Marathon race is held in the spring - on the first Monday of April - to be exact. After canceling, postponing, rescheduling and postponing some more, the BAA and Boston Marathon have decided to go full-steam ahead with the race in the fall on October 11th.

During the last few months, Reid has used the ultimate free training app, aka Trackster, to record and document his daily grind. I'm now going to highlight and review some of this most notable runs. Make sure you follow Reid's traiing on Trackster! https://app.trackster.us/#/profile/6763. 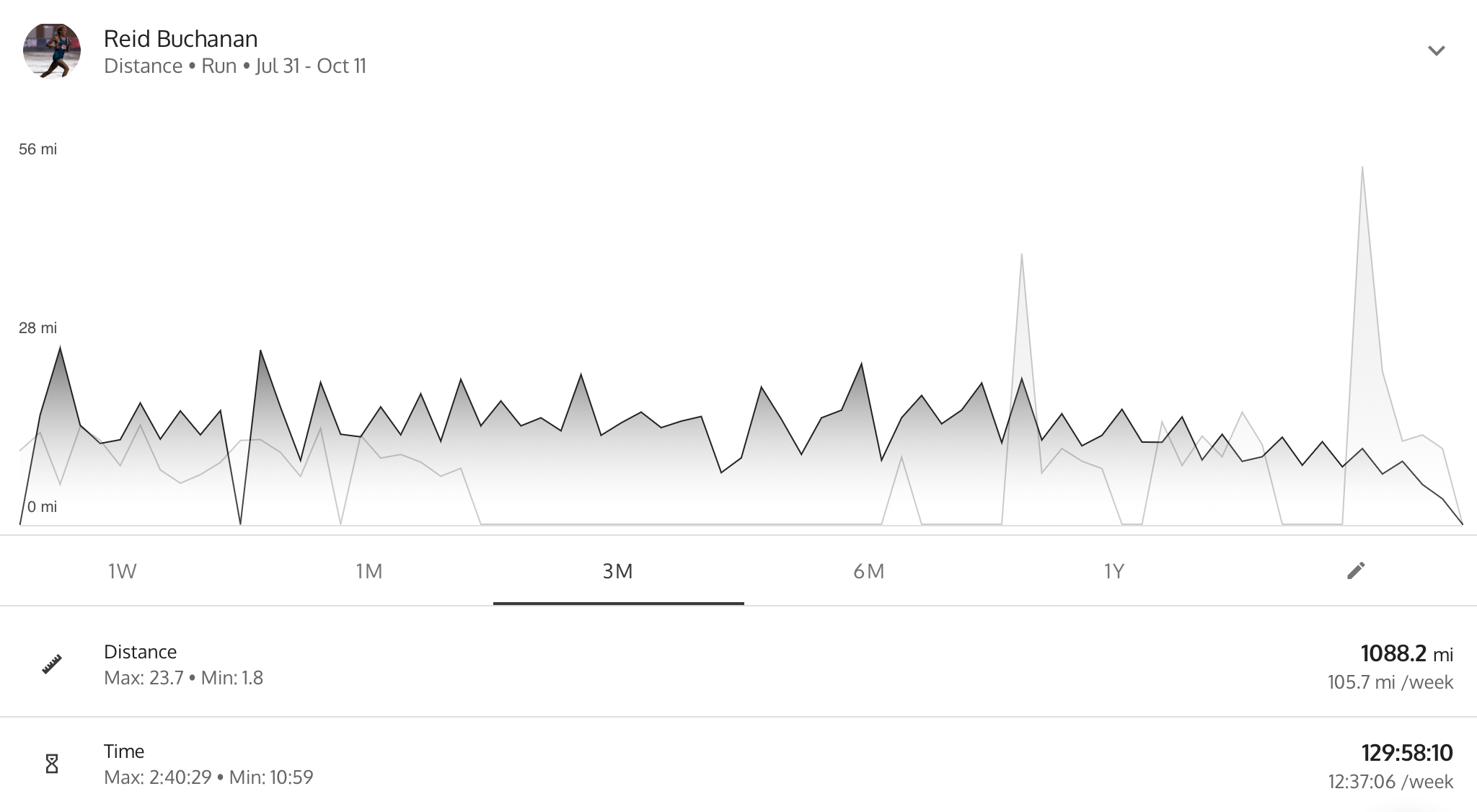 Since the end of July, Reid has posted at least 8 weeks of training totaling at least 100 miles or more. His highest weekly mileage was 9/5-9/11 where he logged an extraordinary 125 miles in 7 days 🤯.

We begin with Reid's second run back getting into training after some time off. A 6.5 mile effort with an average heart rate of 132 equates to a nice relaxed effort for Reid to ease back into training. 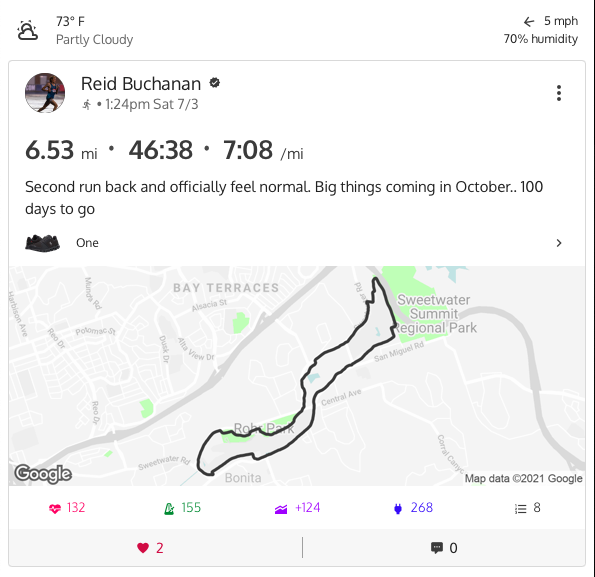 Next up is Reid's first 'long run' of the marathon block. Later on we'll see him rack up over 23 miles in a single run.. hence the quotes around long run. 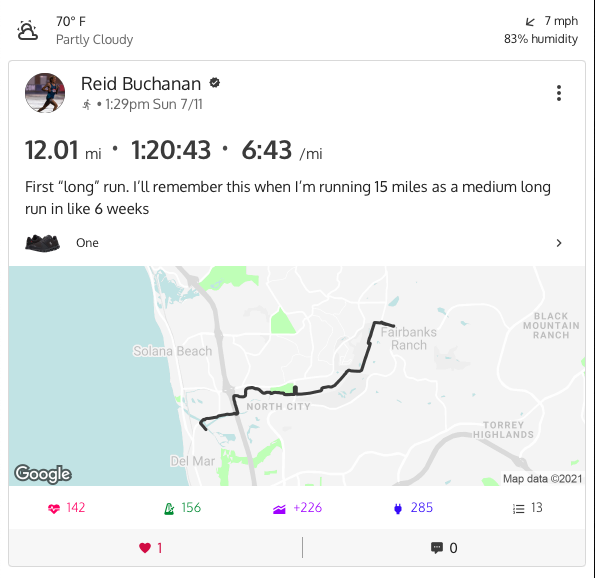 5 days later, Reid did a 800m repeat workout, with a bit of an interesting map. As his description states, this workout was focused on accelerating out of curves around the Miramar Res. Average was 2:23 for each half mile rep with a finishing split of 2:18 to wrap things up. 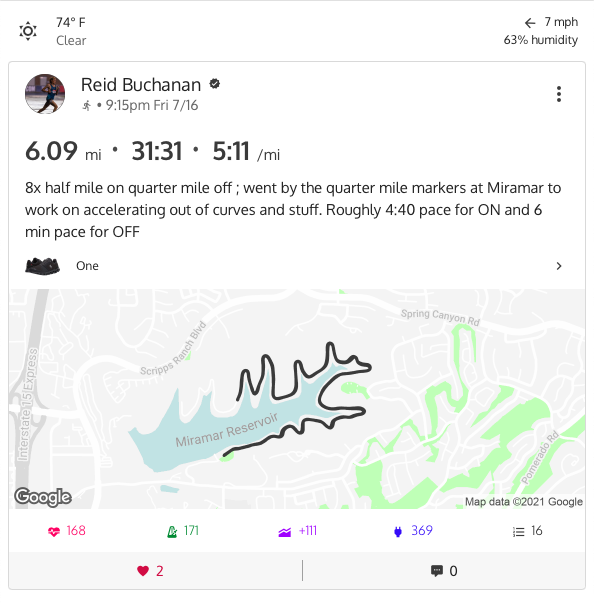 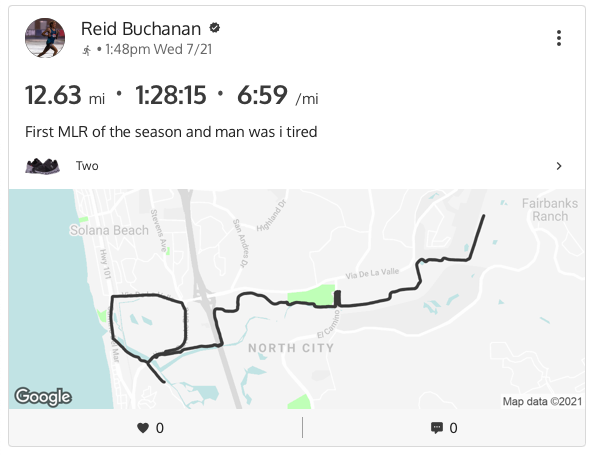 I wanted to highlight the next post not because it's an exceptional training effort but instead because of Reid's thoughts that accompanied the run. * The date on this one is off * 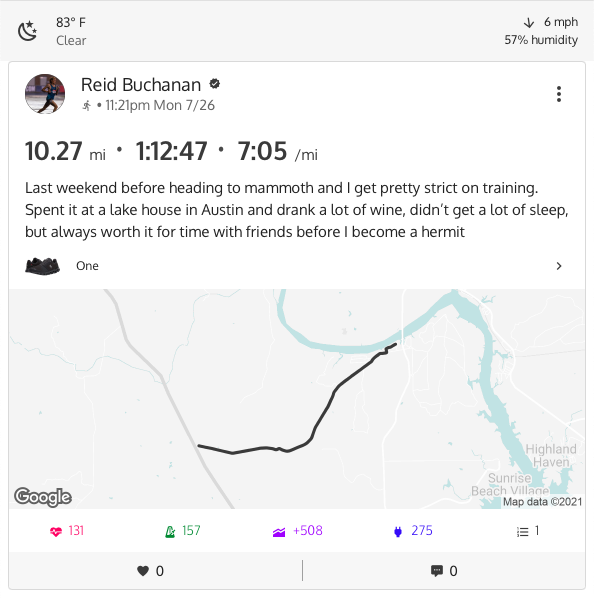 He explains that prior to going to Mammoth to 'get pretty strict on training' he had some extra time allotted for socializing, drinking wine and relaxing with friends. I think this is a small note but a huge lesson. Running over 100 miles per week takes a toll on even the most experience runners and it's crucial to have some fun before and after intense blocks of work.

We we’ll skip a bit of the training in August. It is next-level stuff; however, we simply cannot highlight every great run Reid did during this time or our blog may run out of space. Go check out his training in the Trackster app for yourself.

One thing you’ll notice during the August weeks is that there’s a lot of base building and volume at elevation with rolling hills. This seems like a super important way to train for Boston. As a Boston College alumn, I ran the infamous Heartbreak hill many times as a student-athlete and, while the rest of Massachusetts has steep hills, Heartbreak truly feels like a mountainous terrain in the middle the sleepy metropolitan town of Newton. You simply have to be more than prepared for a huge climb at any moment. Here’s an example of Reid’s work at Mt. Bald. 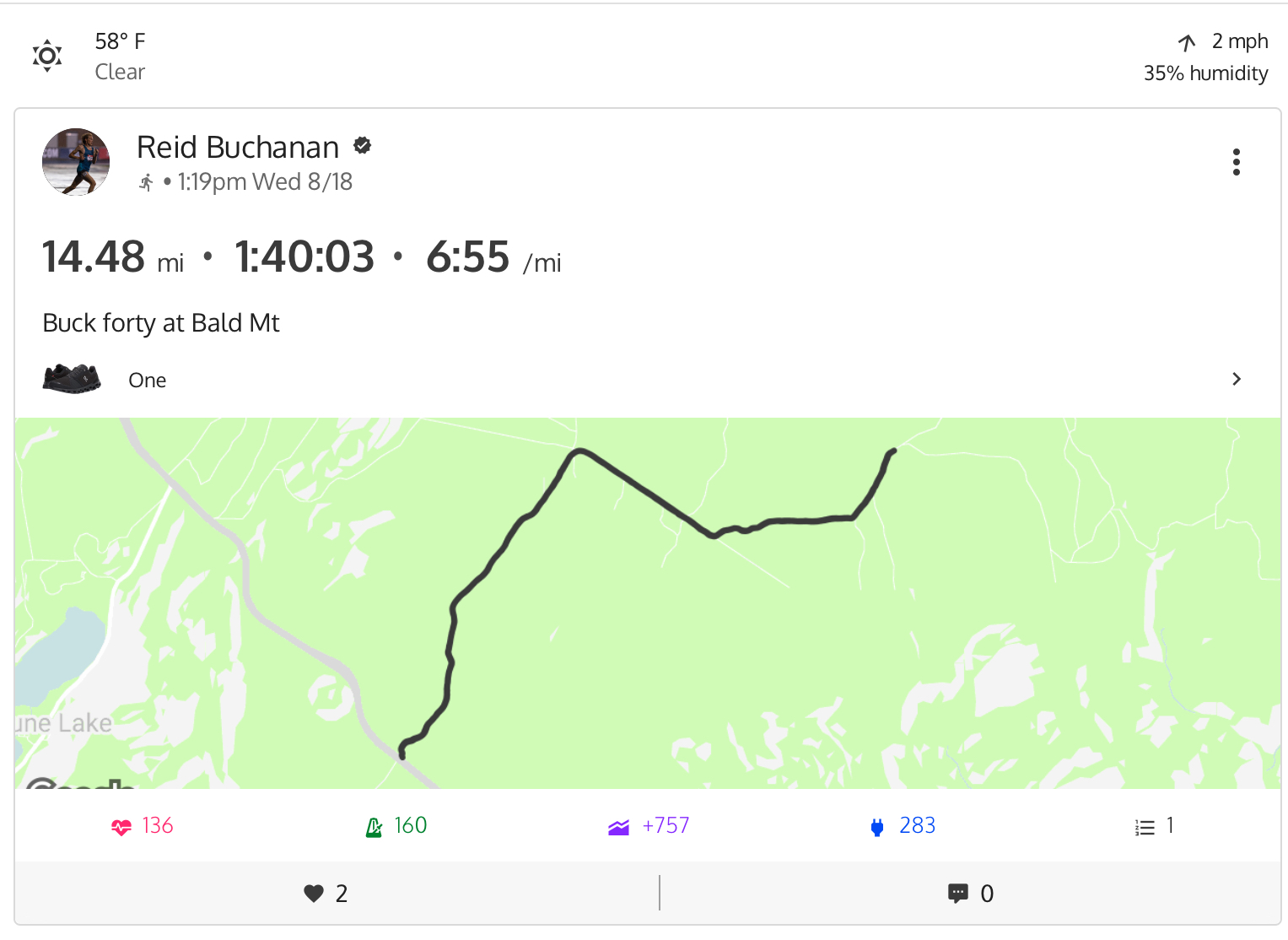 Throughout this training stretch, Reid mentions that he’s battled an inconsistent hindrance where his hamstring cramps up during some workouts. As any marathoner knows, a large part of an individual’s battle with training is with managing injuries. It’s not about if any injury will happen, but when and how a runner can preserve. 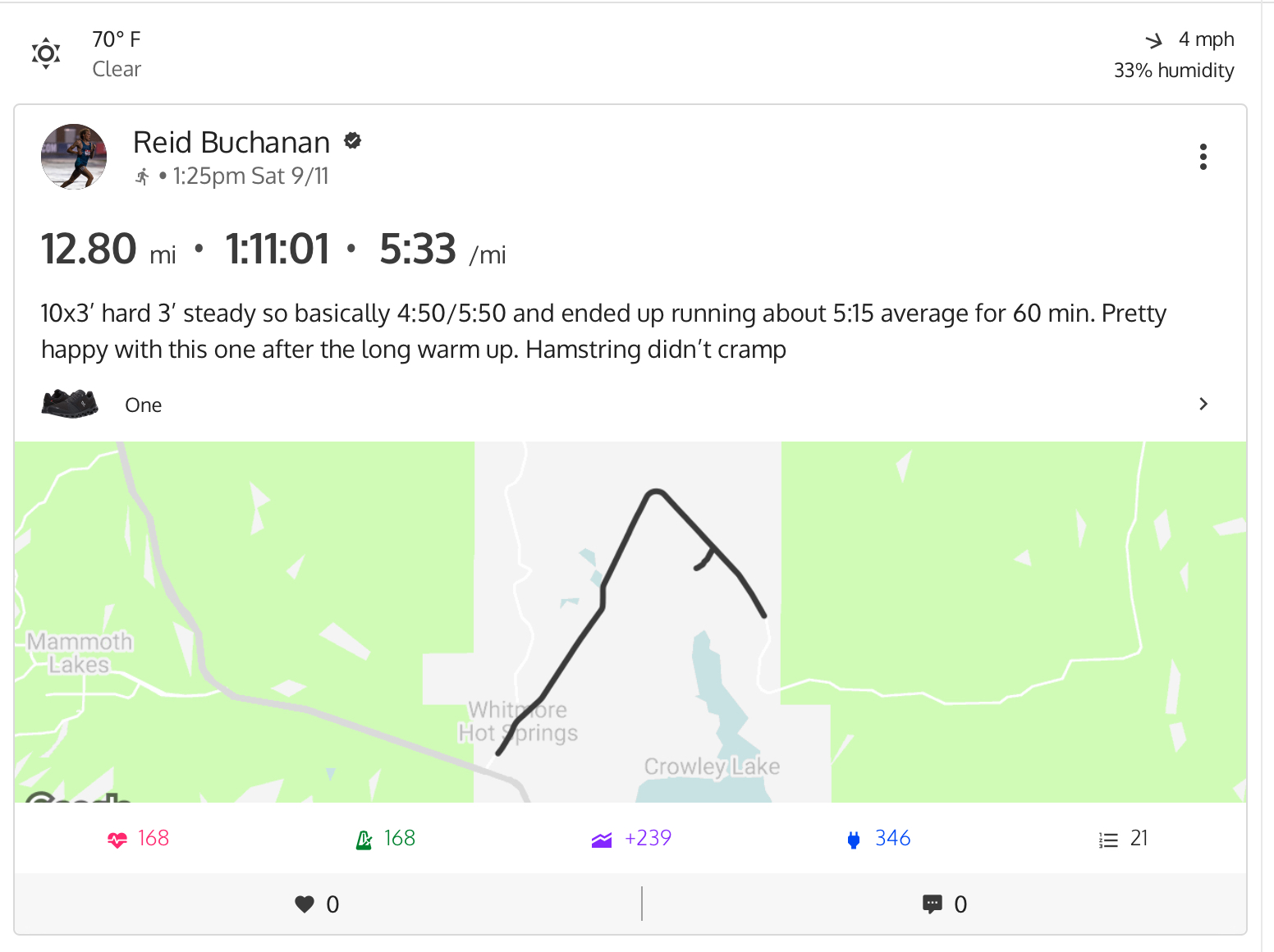 Reid got through a 10x3 minute farther session with the hamstring cramps kept tame. Surely this will be something Reid pays attention to on race day to mitigate potential issues.

Also, he only got started on this fart leak workout after running a cool 12.+ mile warm up. 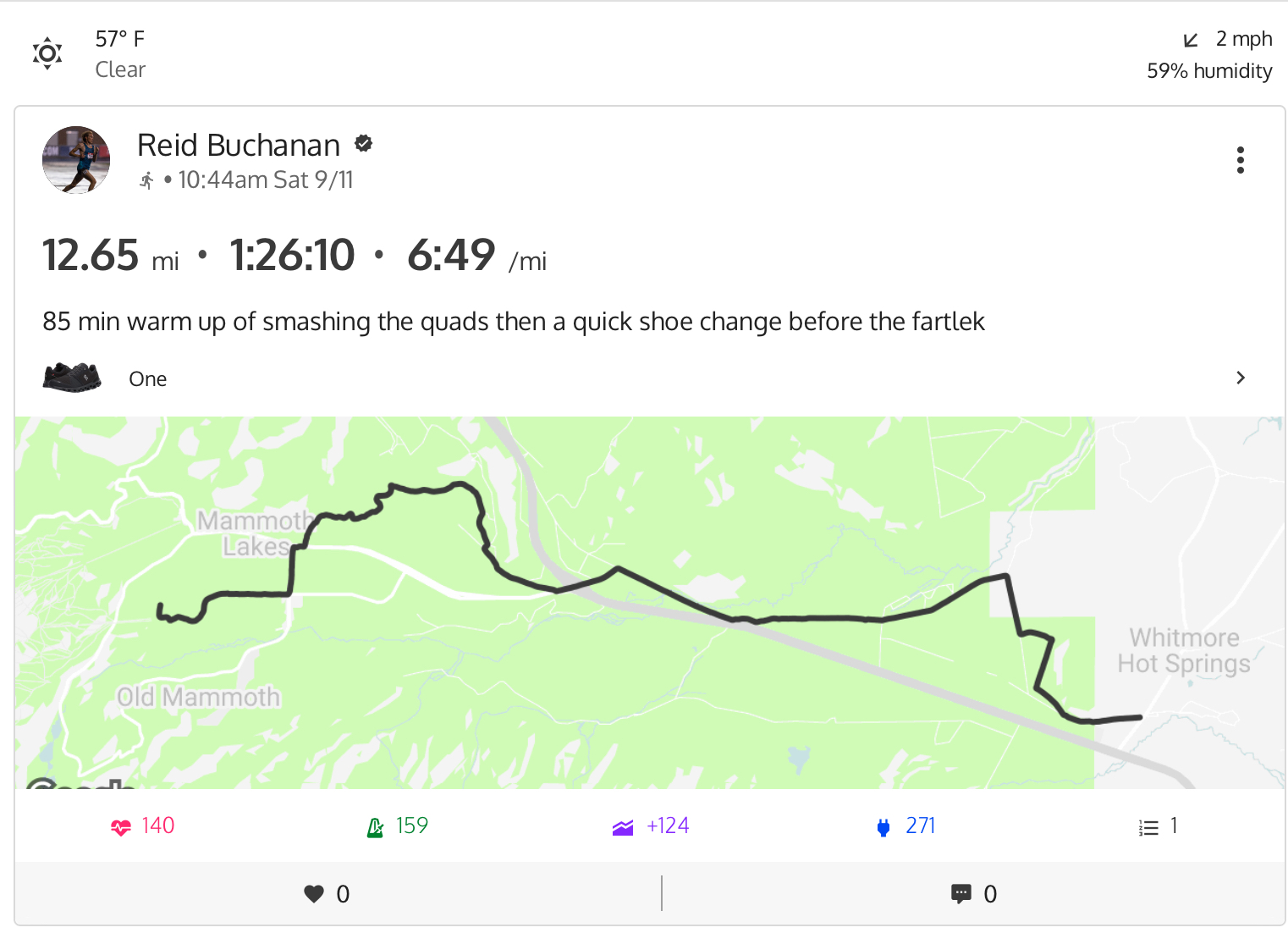 Soon after the above behemoth of a workout, Reid had another barn burner on deck - mile repeats.

This classic distance workout has been extended for a marathoner’s long goal. Reid ran 7 mile intervals with an average of 4:32 and a fastest time of 4:31. As Reid writes, I’m not sure how many are doing this workout at 7k feet. My gues is that it’s a number of american men you can count on one hand. 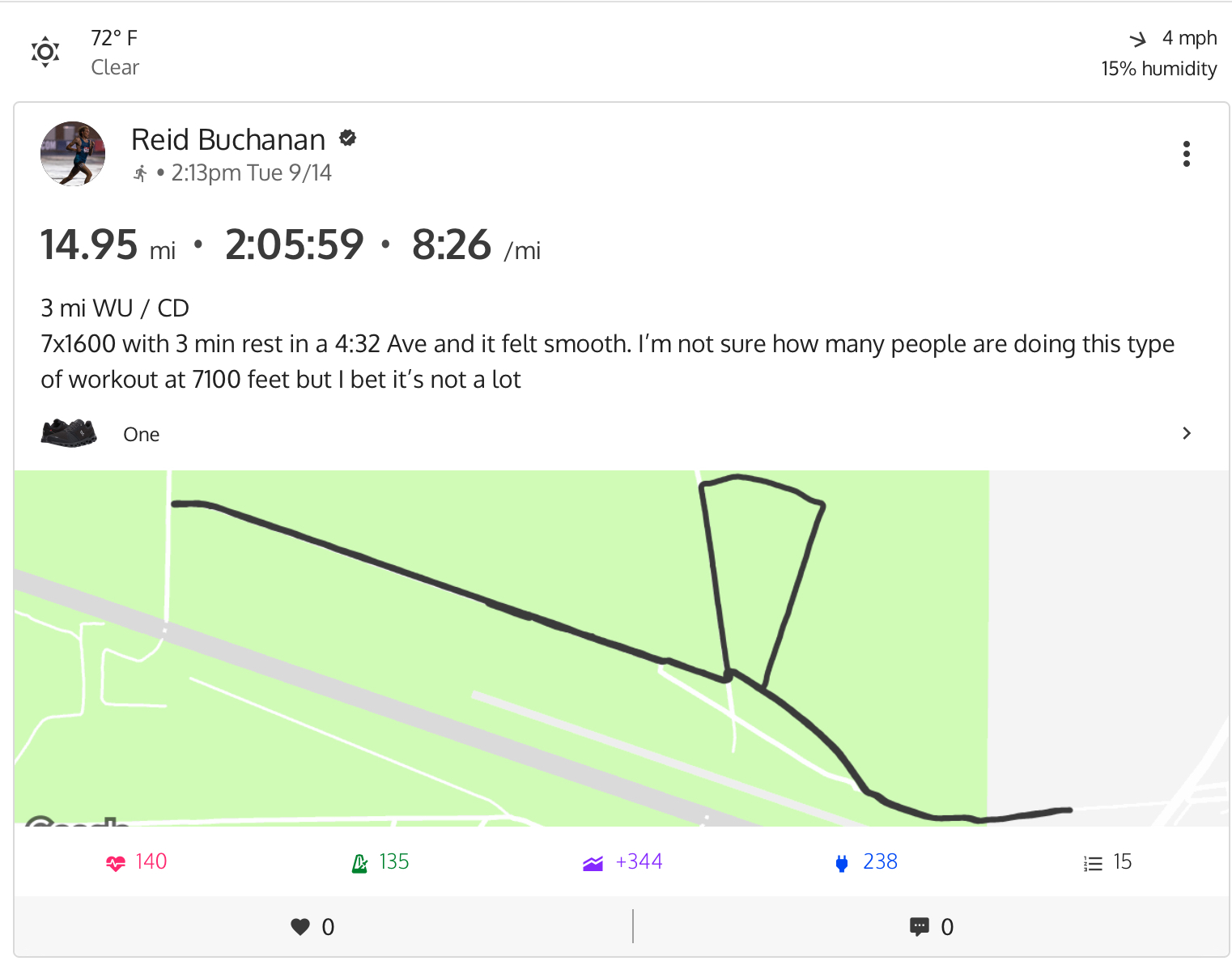 3 days - yes, just 72 hours or less than half of a week - after the obscene mile repeats, Reid had another workout on tap at elevation. 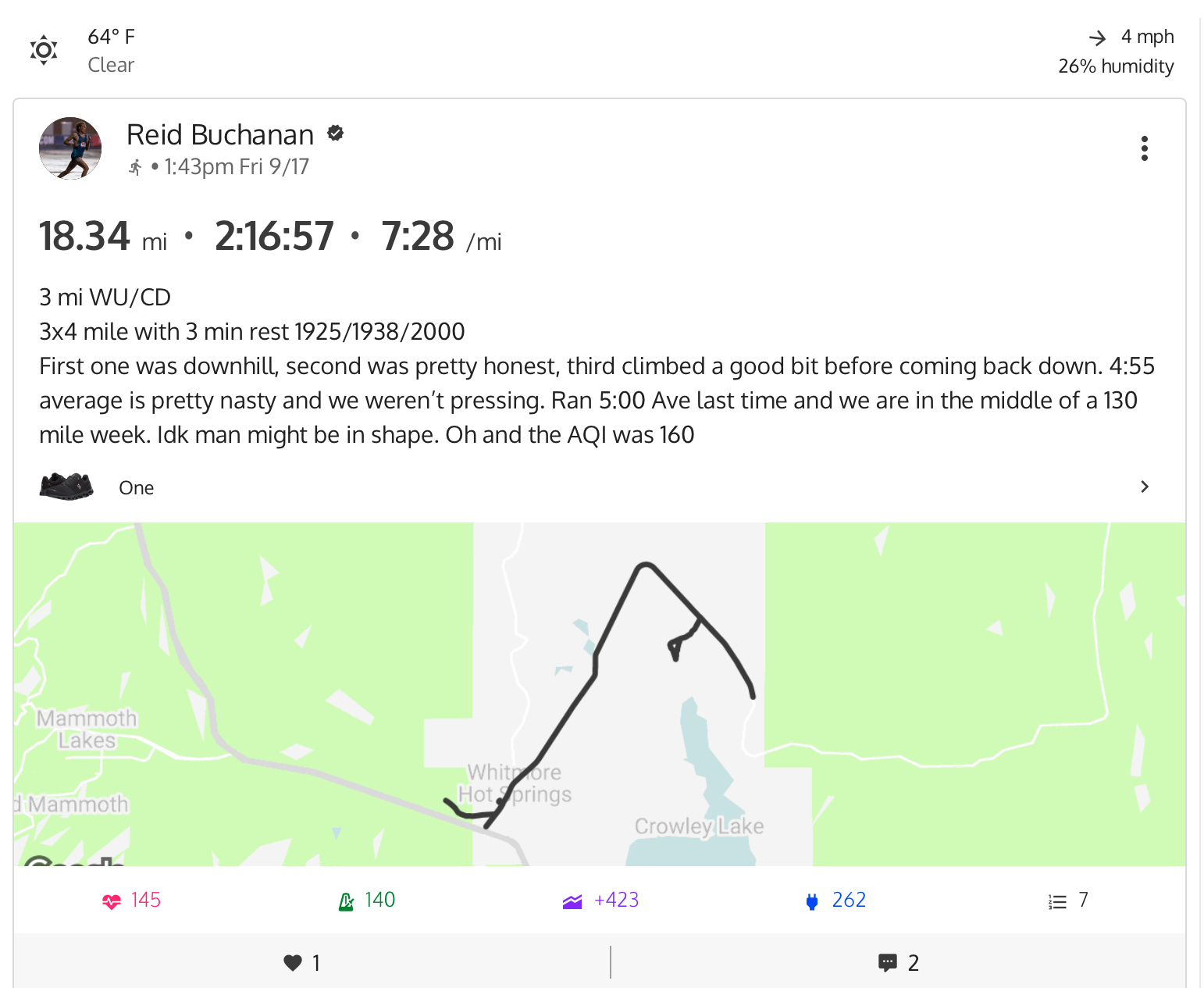 This time the volume of work was even higher than the last workout with 3 intervals of 4 mile length. Averaging 5 minute flat pace with rolling hills (again at 7k+ elevation) is just really hard to believe. Alas, we have the COROS data to prove it is true without a doubt. This is flat out nuts.

There’s a healthy debate in the pro marathon world regarding the proper long run distance to finish a training block with. Reid, implicitly, tells us what Coach Andrew Kastor’s opinion is on this matter with the next run.

The final long run of the pre-boston marathon block was 2 hours and 30 minutes at 6:30 pace. So, basically, super chill.

Feast your eyes on this one: 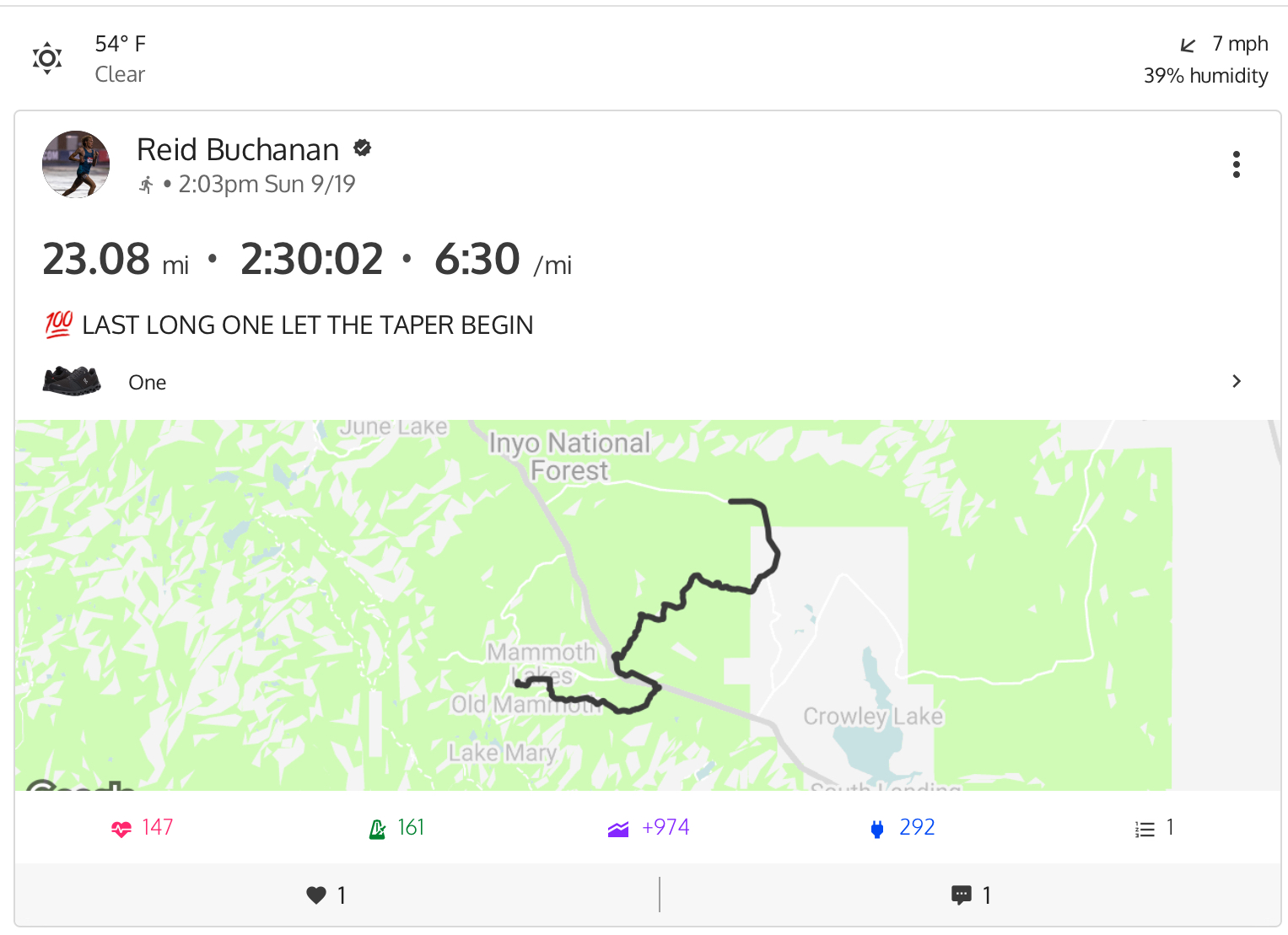 After the final long, long run and over 120 miles in a single week, Reid started to pull back just a bit on the volume. It seems the focus was on pushing the pace and establishing some lower gears on top of his ridiculous endurance foundation that was establish in August and September.

If you check out Reid’s Trackster profile around this time you’ll see some 10k workouts, 200m sprints and shake outs. Here’s some highlights in the form of screenshot. 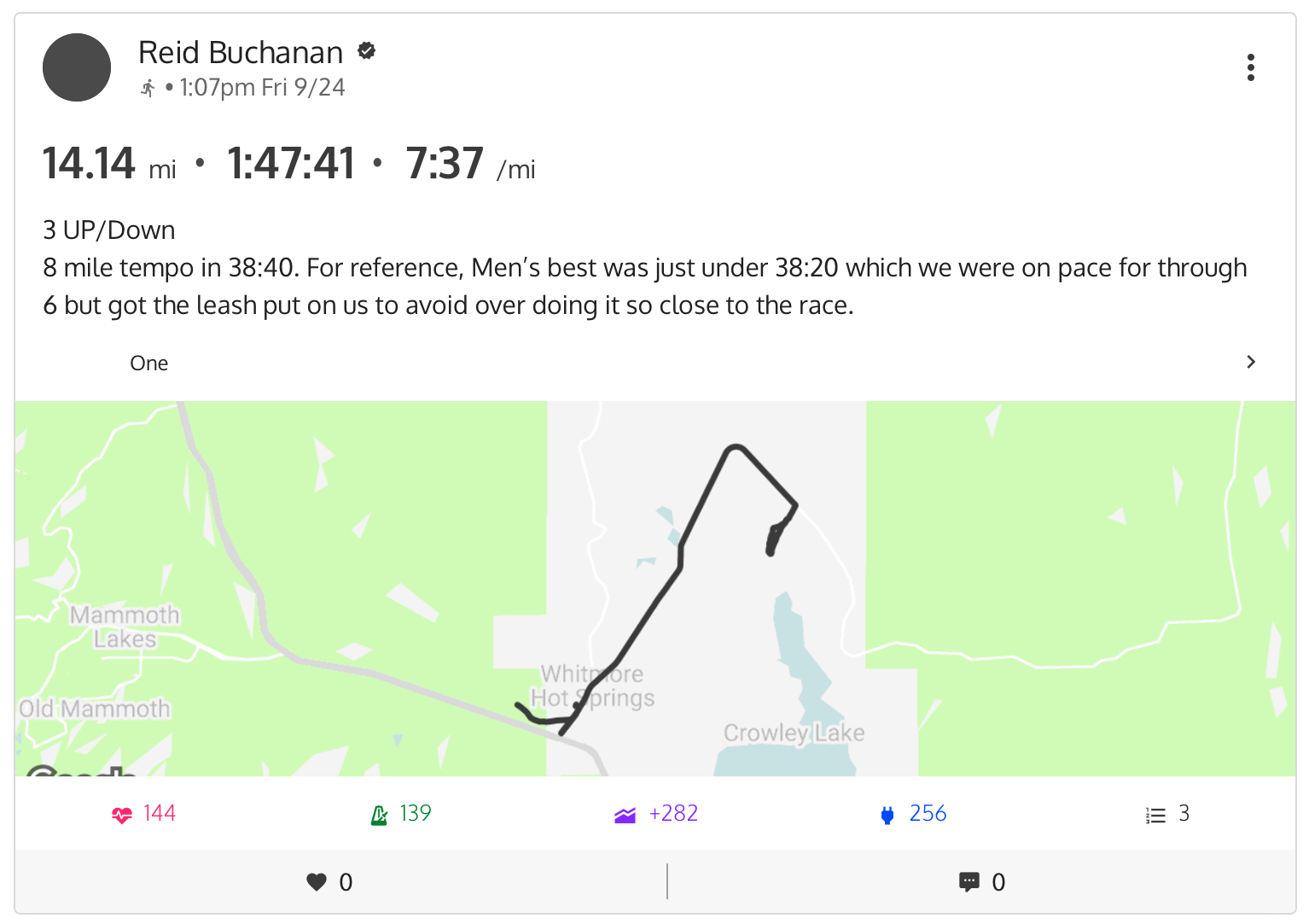 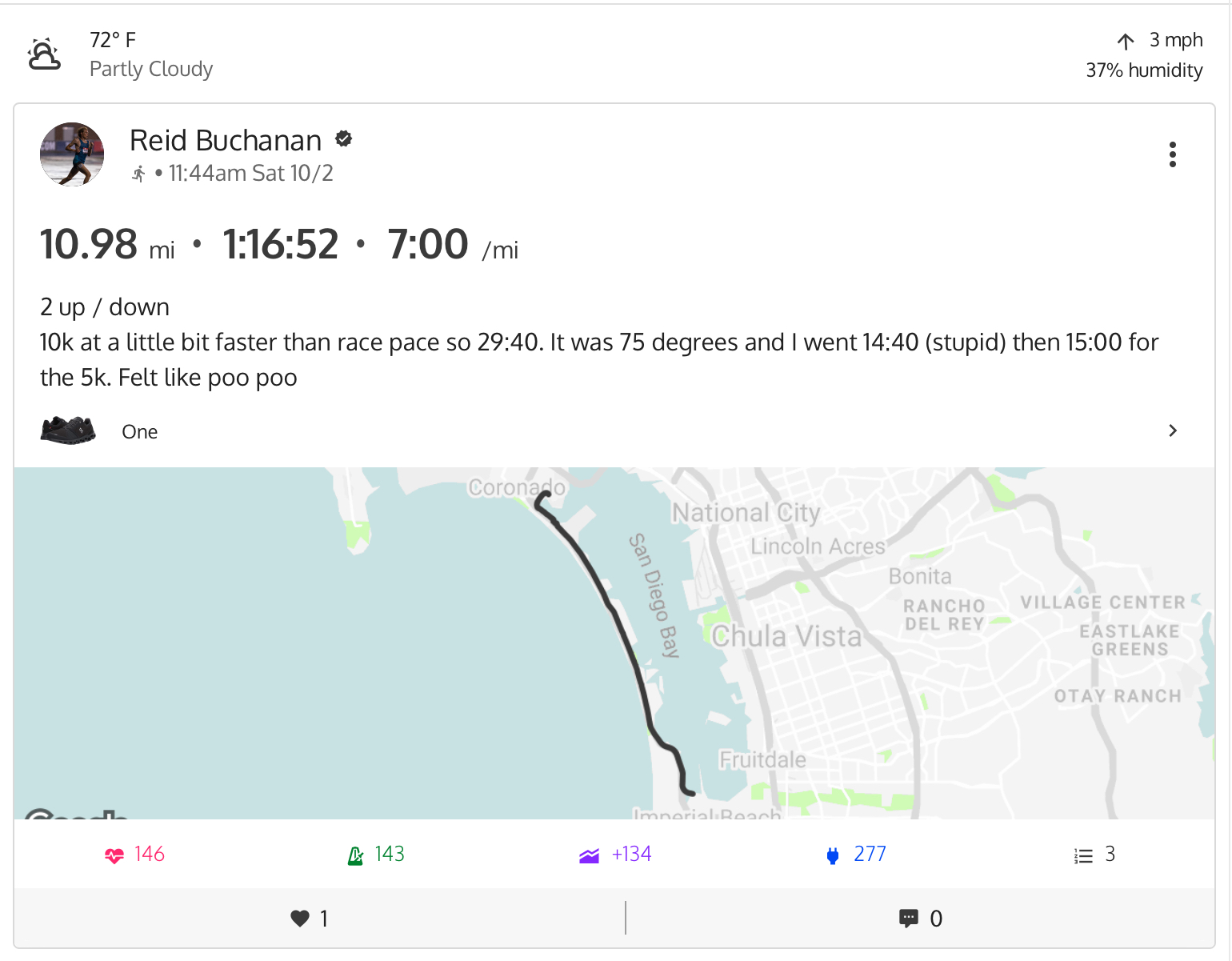 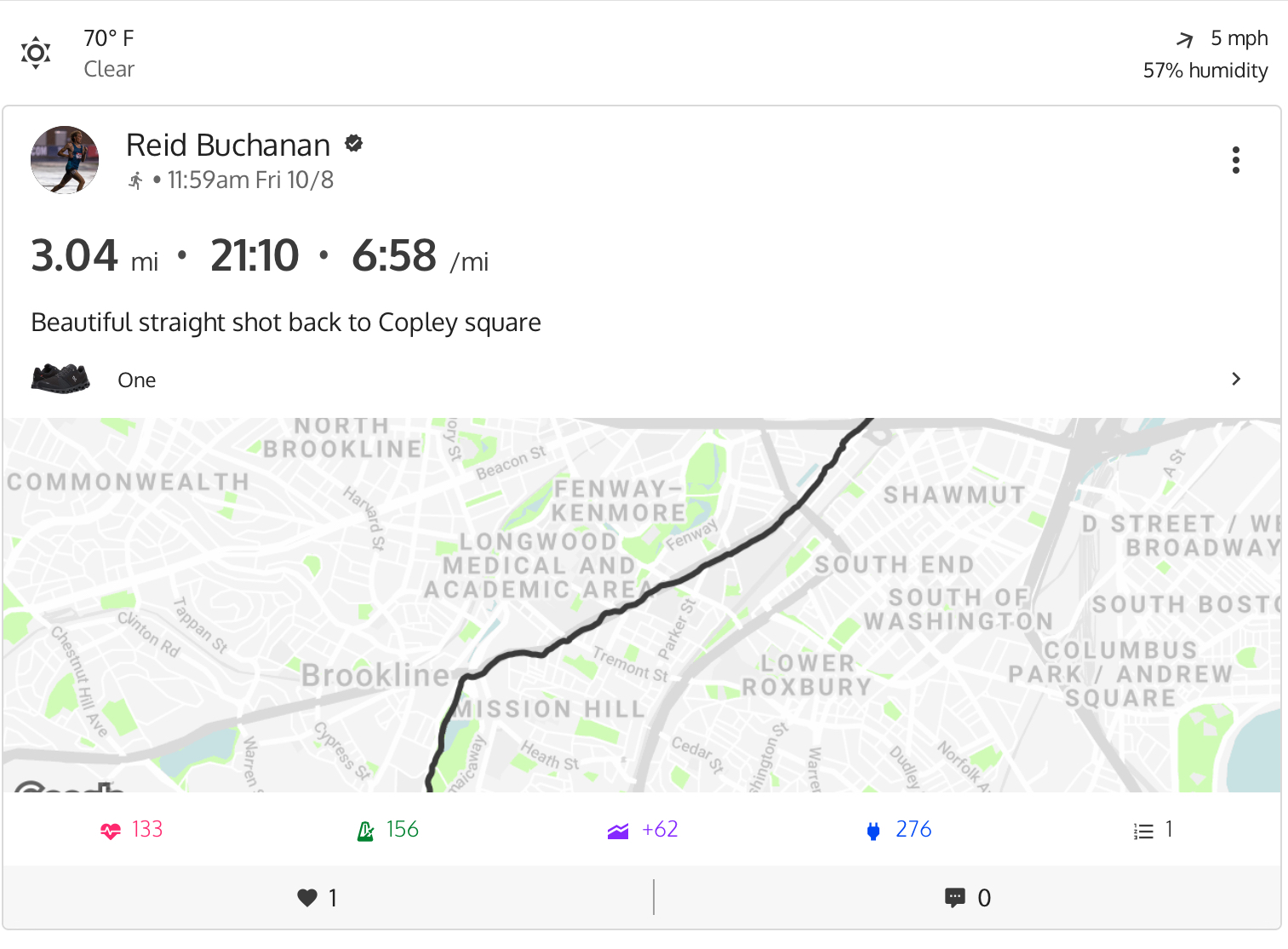 First I want to say a huge thank you to Reid for trusting Trackster with such an enormous honor - we love seeing runners of lelvels and abilities on Trackster but, if being 100% honest, it’s super super special to have this level of stuff on our app. Thanks Reid.

If I were to bet on marathons like Big Cat does NFL parlays in the Barstool app, I would make a big ol’ lump sum deposit on Reid having a successful race on Monday Oct 11 in Boston. This training is just crazy. I think Coach Kastor deserves a lot of props for preparing Reid and the other athletes in what appears to be a super thoughtful manner.

I’m super excited that Boston has returned and I’m super excited to see what Reid can do out there on the legendary course. Win, lose or draw I’m going to be extremely proud of Buchanan’s efforts and I hope y’all are hype to check out the results!